In October 2009 the public was invited to a panel discussion in the Student Cafeteria of THS graduates who played on the Ramblers and Trojan basketball teams. Prior to the landmark U. S. Supreme Court Case Oliver L. Brown, et.al. v. Board of Education of Topeka, Topekans of all colors enjoyed excellent educational opportunities, but the settings were questioned.

While Topeka High School was integrated, grade schools were not. And while most sports and activities at Topeka high were integrated, basketball was not. White boys were Trojans; Black boys were Ramblers. Separate but Equal?

It was the goal of the sponsors of this event: Shawnee County Historical Society, Topeka High Historical Society, Visit Topeka, National Park Services, WIBW, and the Shawnee County Sports Council, that the dialogue that began that evening will continue – and others will share their experiences and memories so our children and grandchildren truly understand the world they inherit, and they have a more clear understanding of their own mission and role in achieving freedom and equality. 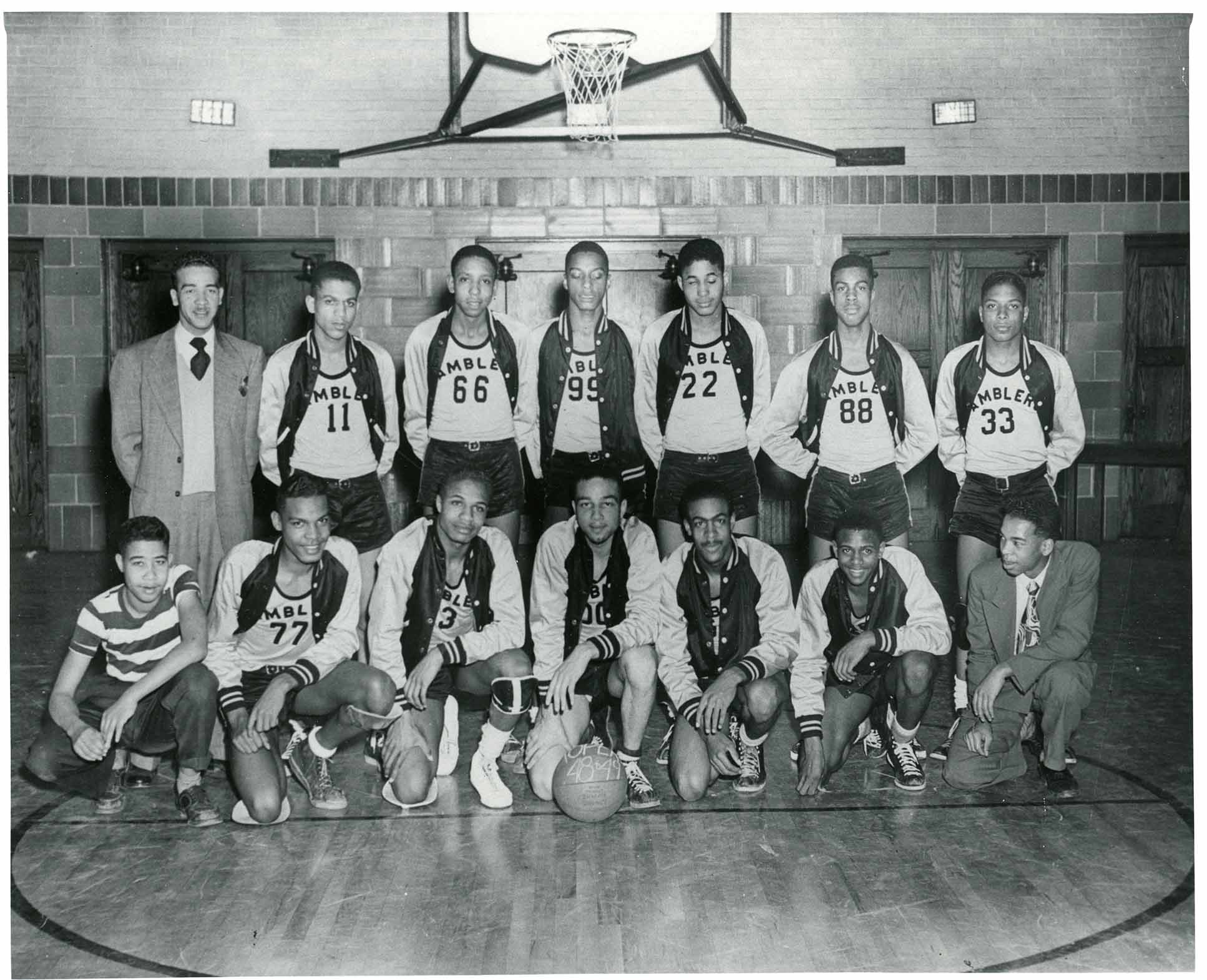 Restoration of the windows in the Topeka High Library was complete in September 2009.

This work also completed the entire restoration of all 6 areas in the building with stained glass. 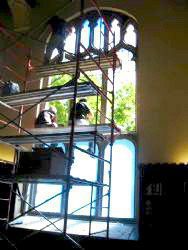 In the summer of 2009 the student cafeteria got a fantastic upgrade; chandeliers! Four of the chandeliers are originals and local business Degginger’s Foundry used the parts from them to create molds for 20 additional replicas.

Thanks to the generosity of Jayne Allen Powell’s (THS ’55) lead gift in memory of her brother James Allen ’51, which was matched by the classes of 1951 and 1958, the cafeteria is another step closer to its original appearance. 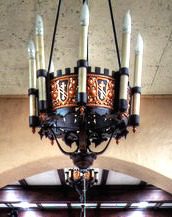 Above the fireplace in The English Room (306) hangs his 1937 painting of medieval pilgrims, ” The Pageant of England”.

Funded by a 1937 WPA grant, the School Board commissioned Mr. Overmyer to paint the massive wall mural, nearly 1,000 square feet, for the teachers’ cafeteria.

In 1986 the THS Historical Society acquired from Shawnee County the 6’8″ by 14′ Overmyer mural titled “Kansas, the End of the Trail”.

The Kansas Free Fair Assn. had originally commissioned the painting in 1939 for its new Agriculture Hall. Paul Beauchamp restored it for the Society, as one of the first of many accomplishments during the next 25 years.

Born in Topeka in 1889, Overmyer was an illustrator; a painter who specialized in murals, portraits, and landscapes; a commercial artist; and a teacher. He studied at the Reid-Stone Art School in Topeka and the Chicago Academy of Fine Arts. He was hired in 1945, by Charles Marshall, state architect, to paint murals depicting the state’s history in the first floor of the Capitol’s rotunda. Because of the limited funds available, Marshall had to hire Overmyer as an ordinary painter, paying him the same wages as if the walls were to be painted with interior house paint. 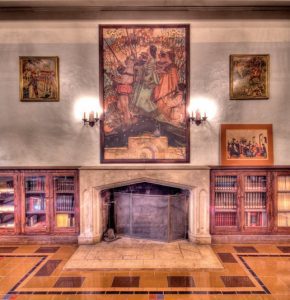 This piece can be found in the English Room.

Accompanied on the piano by Robert Roche, Miss Manager’s versatile and powerful voice filled the auditorium with arias from The Marriage of Figaro, Tannhauser, Tosca, and Gerschwin. With help from the Madrigals she touched our hearts singing The Mountains Shall Depart and raised the roof, accompanied by the THS Jazz Band, on Fly Me to the Moon.

On March 31, 2011 a beautiful bronze Trojan Statue was dedicated at THS. This Proud Trojan was installed in front of the school between the main walkways. It will stand for years as a symbol of the pride and tradition at Topeka High School.

Topeka High thanks Mr. Adrian Whited and Mr. John Alberg of the THS Class of 1948 for this addition to the THS campus. 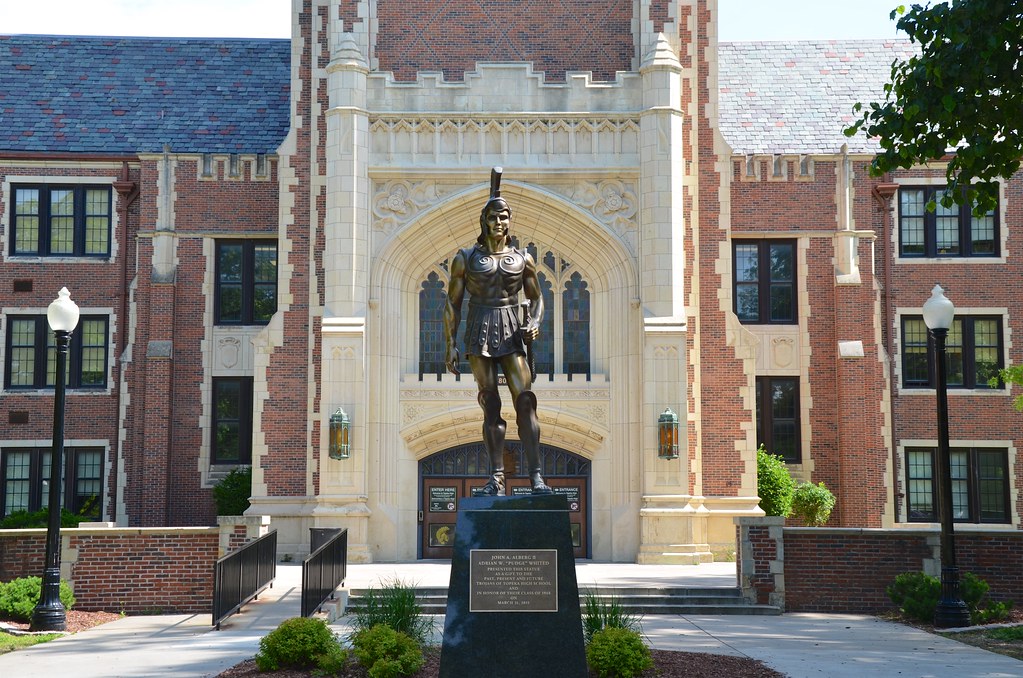 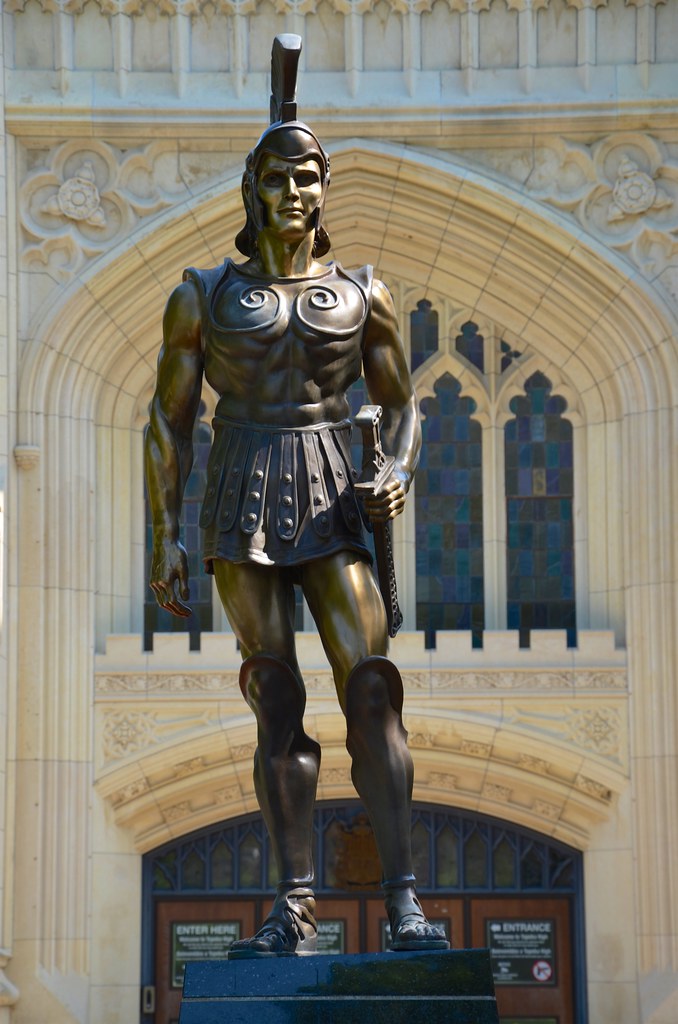 A resurgence and invigoration of the art scene in Topeka has occurred in recent years with the opening of NOTO (North Topeka Arts District), First Friday Art Walks, relocation of young artists to Topeka, and established artists opening studios. The Topeka High Art Department has jumped on the art bandwagon by participating in several First Friday Art Walks showcasing student work.

A THS Graduate Art Show opened on March 4th, 2012 in the THS Art Gallery, as a stop on Topeka’s First Friday Art Walk. Showcased pieces were created by graduates who have become professional artists, alongside pieces designed by weekend hobbyists. Artists donated their work and silent bidding began that evening. A portion of the proceeds were used to purchase non-budgeted equipment for the THS Art Department and display equipment for the Art Gallery.

Topeka High Art has a Facebook Page and is a place to communicate about Topeka High Art, its events, and showcase our amazing student’s work. Visit it HERE. 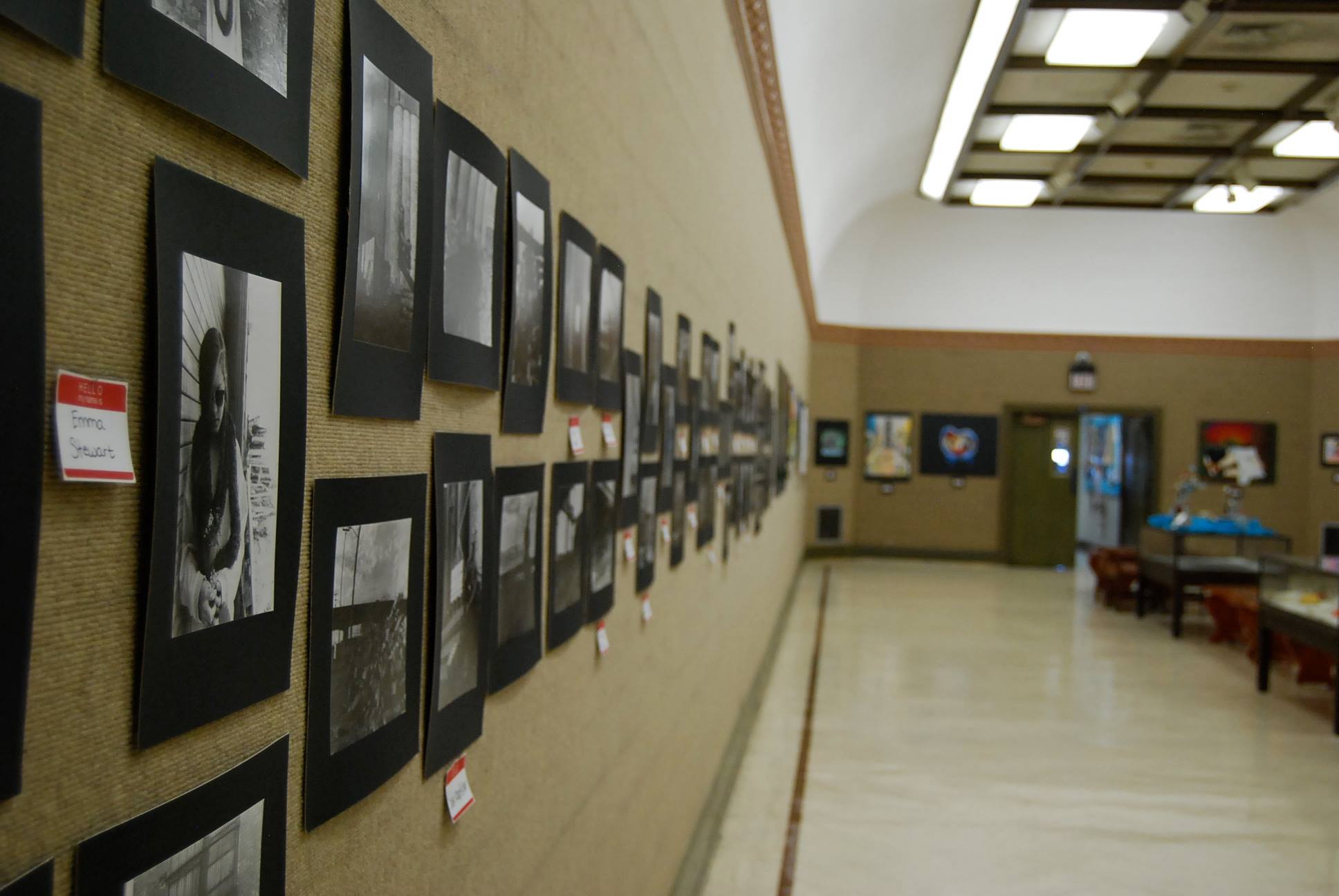 Kendall Construction, under the supervision of Dave Cooper, was responsible for the transformation, which consists of six glass-topped display cases, slat board walls for interchangeable displays, a functional office, a television to show years of converted video and storage cabinets for our artifact and archival material. 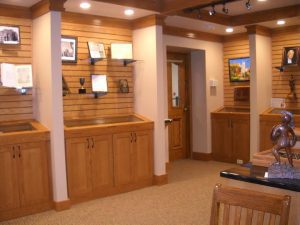 In April 2015 four 7’ x 11’ murals were installed in the THS Chester Woodward Library.

Not merely pieces of beauty, the murals tell the story of 5,000 years of the written word, communication, information and humanity. The subjects of the panels are: 1. “Ancient Scripts” 2. “Medieval Scribes” 3. “The Written Word” and 4. “The Digital Age” – a learning tool for current and future Trojans.

The west entrance plaza containing a brick walking path, two sitting walls, four Topeka High themed murals and tables for use as an outdoor classroom, lunch space and social gatherings was dedicated on May 11; thanks to the generosity of a family that can boast of nine siblings who graduated from Topeka High from 1941 to 1961. 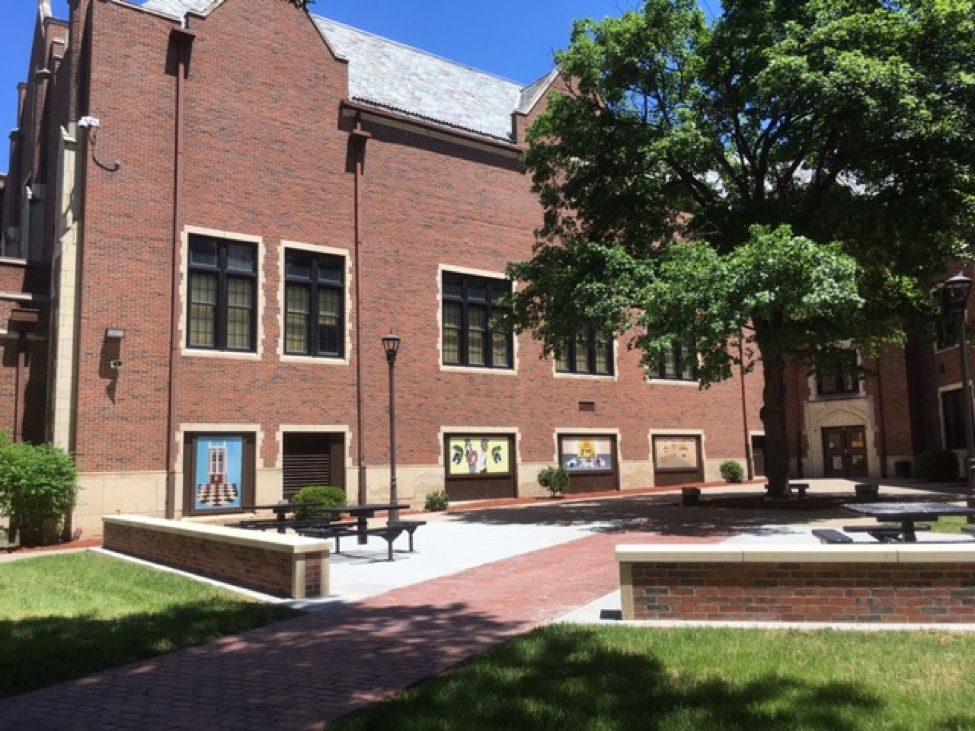 Shade and Kansas rains (or lack thereof) have forever presented a grass growing challenge on the west campus. Now there are designated pathways and a beautiful and useful plaza for the school. Topeka High and the THS Historical Society thank the Barrett Family. Watch the dedication ceremony: